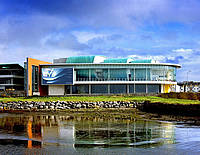 Eye Cinema, one of the green island’s most modern movie venues, has now completely switched to Kinoton 2K and 4K D-Cinema projection solutions (DCS). Since the cinema first opened eight years ago, its independent operator has relied on projection systems from Kinoton. He had two of the auditoriums equipped with Kinoton D-Cinema projection solutions with integrated 3D systems back in 2009. Now the other six auditoriums, which had used analog FP 50 D projectors from Kinoton, have also been upgraded to state-of-the-art Kinoton DCS systems.

Eye Cinema contracted the U.K.-based Kinoton sales and service partner Omnex Pro Film to install the high-end Kinoton DCS Digital Cinema Solutions. Omnex had already equipped each of the first two auditoriums with a DCP 70 L of the Series I, including a 3D system. The newly installed projection systems include a premium 4K D-Cinema projector of the type DCP 30 LX II - 4K as well as five type DCP 30 SX II - 2K projectors. As a result, Eye Cinema is now able to fully tap the potential of digital programming in all of its auditoriums. The projects are based on projection technology supplied by Barco. 1.38-inch 4K and 1.2-inch 2K DLP Cinema® Series II technology from Texas Instruments ensures highly precise color reproduction and brilliant contrast.

Eye Cinema in Galway, a culturally and economically important city in western Ireland, now offers moviegoers an exceptional experience. The building is real eye candy with its modern design, fully living up to its name’s promise. All of the auditoriums feature large screens to accommodate widescreen and Cinemascope formats for brilliant images, backed by Dolby Digital Surround Sound for pure listening enjoyment. The Eye Cinema’s operator has made a point of making the theatre fully accessible to people with disabilities. All of the auditoriums are designed so wheelchair users can easily get to them and have sufficient space for maneuvering. They also all include a system for on-screen subtitles and audio descriptions for the deaf and hard of hearing. For visually challenged patrons, the cinema has infrared headphones.